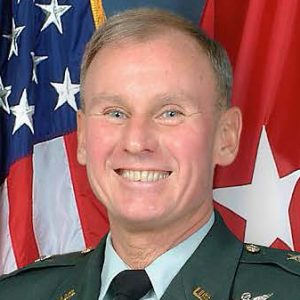 General Denson began his career when he was drafted in December 1965. He volunteered for pilot training, graduated in March 1967 and reported to his unit in Viet Nam within 2 weeks. General Denson’s assignments included 2 combat tours in Viet Nam as a pilot. Between tours he served as a flight instructor at Hunter Army Airfield in Savannah Georgia.

General Denson has flown over 10,000 hours — 1,277 of them in combat. He is rated to fly both helicopters and airplanes. His many military awards include the Distinguished Service Medal, Silver Star, the Distinguished Flying Cross, the Bronze Star Medal, the Purple Heart, and 35 Air Medals.

General Denson is a graduate of the Army’s Command and General Staff College, the Air Force’s Air War College, and numerous military training courses. He holds a degree in Business Administration.